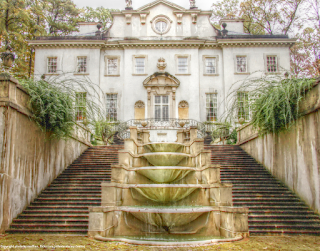 If you yearn to spend an exciting day exploring the history of Atlanta and viewing some of the city’s most iconic treasures, then the Atlanta History Center is just the ticket! The Center’s sprawling 33-acre campus in Buckhead features stunning gardens, farm buildings and equipment from the 1800s, and the classical Swan House, spotlighted so prominently in The Hunger Games films. But the highlight of your day will be the immersive experience viewing the newly restored cyclorama depicting the Battle of Atlanta in 1864.

Where can you view a work of art that is 132 years old, weighs 10,000 pounds, and is 49 feet tall and longer than a football field? Right here at the Atlanta History Center—now home to the newly restored cyclorama that features the Battle of Atlanta. This historic painting is one of only two cycloramas now remaining in the country. The other depicts the Battle of Gettysburg and is housed at Gettysburg National Military Park in Pennsylvania.

Cycloramas were popular three-dimensional modes of visual entertainment in the late 1800s, considered the equivalent of virtual reality today. Painted over a five-month period in 1888 by 17 German artists, the Battle of Atlanta cyclorama first debuted in Minneapolis and transported viewers right into the heart of the battle scene. Over the years, the cyclorama was reinterpreted (and misinterpreted) to fit its Northern or Southern audiences.

The cyclorama found a permanent home in 1891 in Atlanta, in Grant Park near Zoo Atlanta. The Atlanta History Center rescued the dilapidated painting in 2015, restored it to its former glory, and opened the new exhibit to the public in 2019. A 12-minute film, projected onto the painting, tells the history of the painting and the Battle of Atlanta through different perspectives and experiences. 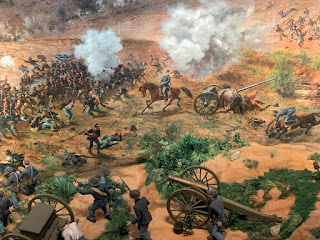 The bottom of the cyclorama painting seamlessly meets the floor where “floor mannequins,” dressed as soldiers, along with faux battle artillery and terrain, give the viewer a three-dimensional experience of being “in” the battle.

All Aboard The Texas

One of the newest exhibits sure to captivate kids and adults alike is Locomotion: Railroads and the Making of Atlanta, featuring the Texas, a restored locomotive, and the Zero Mile Post. The Western & Atlantic Railroad, which established Atlanta as it terminus in 1837, and operated between Atlanta and Chattanooga, built the engine of the Texas in 1856. The Texas ran for nearly 51 years and is one of only two restored Western & Atlantic locomotives left. The other, the General, was made famous by the Great Locomotive Chase of 1862, and is housed in Kennesaw at the Southern Museum of Civil War and Locomotive History. The Texas went through several upgrades, the last of which was in 1886, the same year the cyclorama was painted. The Texas has been on display with the cyclorama since 1927 and was moved with the painting to the Atlanta History Center. Visitors can have a hands-on experience, step back in time and climb aboard the Texas.

The Zero Mile Post was positioned in the 1850s to mark the Atlanta terminus of the railroad and used to designate Atlanta’s city center. The marker is 7 feet, 5 inches tall and weighs over 800 pounds! It is located next to the Texas. 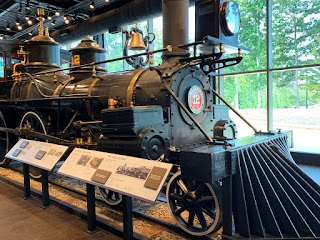 The Texas ran for nearly 51 years and is one of only two restored Western & Atlantic locomotives left on display.

The Swan House—the Grand Dame of the History Center

For a “Great Gatsby” experience, don’t miss out on touring the Swan House and reliving the Atlanta social scene of the 1930s. Once home to the prominent Inman family who helped shape Atlanta, the Swan House is now home to the Atlanta Historical Society. The mansion and grounds gained new prominence when used as a key filming location in The Hunger Games movies as the elaborate Capitol home of President Snow. The classical manor was built in 1928 and named for the swan motif used throughout the house and said to be a favorite of Mrs. Inman.

“Doing lunch” at the Swan Coach House, adjacent to the Swan House, is an Atlanta tradition. Known for its Southern fare, including chicken salad and frozen fruit salad, the Swan Coach House offers guests the opportunity to enjoy signature dishes in a sumptuous setting and to visit the art gallery and gift shop. 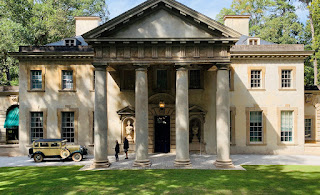 The Swan House was built in 1928 for the Inman family and now houses the Atlanta Historical Society. It was a key film location for The Hunger Games movies.

Visit the Smith Family Farm on the Center’s campus and take a step back in time to learn about farming and daily life in the 1860s. The Smith House is the oldest surviving farmhouse in Atlanta and was built in the 1840s for hog farmer Robert Hiram Smith. Enjoy a “hands-on” experience and explore not only the farmhouse but a separate kitchen, blacksmith shop, smokehouse, chicken coop, and vegetable and herb garden. Not only will you learn about farm life from the family’s perspective, but from the viewpoint of the enslaved African Americans who worked the farm and represented half the people living there. When you go home, you can still enjoy the antics of the farm’s sheep and goats by streaming the Center’s live sheep and goat cam! 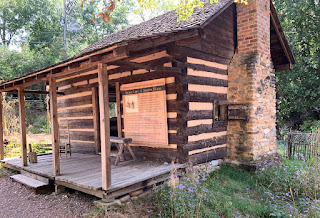 Visit the vintage buildings of the Smith Family Farm and learn what life was like, not just for the farming family, but for the enslaved African Americans who worked the farm and lived in cabins similar to this.

What you need to know for your visit

The Atlanta History Center is located at 130 West Paces Ferry Rd. NW. Your general admission ticket gives you full access to all the Atlanta History Center’s exhibits, the Goizueta Gardens, the cyclorama, and historic houses. Your general admission ticket is also valid to tour the home of Gone With The Wind author Margaret Mitchell (979 Crescent Ave. NE) within nine days of purchase. Tickets are valid for one-time use and not refundable. Parking is free on site. The on-site Souper Jenny Café is open from 11 a.m. until 5 p.m. and offers delectable soups, sandwiches and salads. 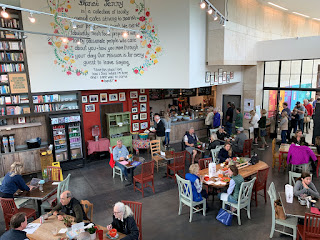 The popular soup and sandwich restaurant, Souper Jenny, is located at the Atlanta History Center. The menu changes daily and features six selections of soups, and sandwich and salad options. If you just want a snack, BRASH coffee offers bakery goods and every kind of coffee you can imagine.

I am a writer and blogger with a specialty in gardening and a proud graduate of the University Of Georgia. I live in Peachtree City with husband, Dan, and enjoy hiking, gardening, being a member of the Peachtree City Garden Club and rooting for the Georgia Bulldogs!

Shopping for the Best Drug Prices